Democracy cannot function as intended if voters neglect to show up at the polls. Over the years, the size of the voting-eligible population and the percentage of those casting ballots have generally1 increased: 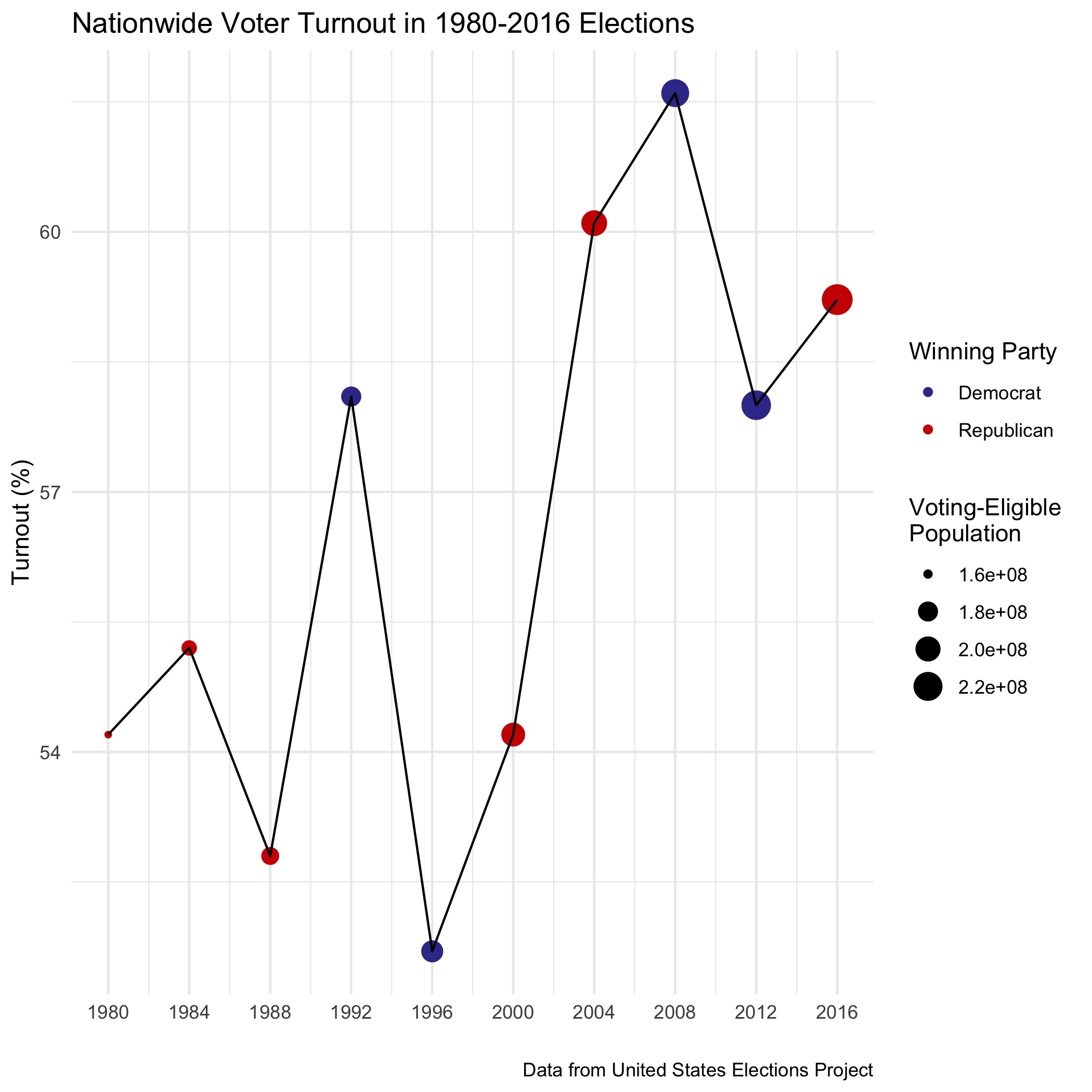 Where will voter turnout in 2020 fall onto this graph? Before the advent of COVID-19, experts in 2019 predicted a historic turnout of approximately 66% of the voting-eligible population2 for the 2020 election. However, it would be naive to blindly assume that the same assumptions from these forecasts hold in the present circumstances. Voter turnout could easily increase or decrease due to the pandemic, depending on whether voters are (a) hindered by confusion over voting by mail3 and safety of in-person voting, or (b) energized by the belief that their candidate can lead our country through these turbulent times.

With a sample size of zero previous elections resembling 2020, this year’s primaries provide the best insights on voter behavior during a global pandemic. Turnout in primaries generally pales in comparison to general election turnout, with numbers sitting around 3%-46% and 60% respectively, and this gap in turnout widens in years where the sitting president seeks re-election. However, the 2020 primary drew far more attention than expected. While most of the showing came from the Democratic side since Donald Trump did not face any viable challengers, this larger-than-expected turnout provides a positive sign that COVID-19 will not drastically decrease, and could potentially even increase, turnout come November.

Indeed, it turns out that experts still expect a record-high turnout in the 2020 election, with the predicted surge strengthened by the pandemic. Consistent with the prediction from 2019, estimates still sit around 65%.

How FiveThirtyEight’s Forecast Adjusts for Unpredictability

While we have ruled out that COVID-19 will guarantee lower voter turnout, forecasters must still grapple with increased levels of uncertainty in turnout numbers. Nate Silver’s forecast at FiveThirtyEight considers the following factors as it accounts for unpredictable voter turnout and uncertainty in Election Day results:

With the above factors in mind, Nate Silver estimates a 50% increase in error when predicting voter turnout and a 20% increase in error when predicting vote share for each party. As a result of how COVID-19 may affect turnout and the voting process, FiveThirtyEight’s model increased Election Day error, correlated state error, and state-specific error by 20% relative to typical values. While FiveThirtyEight certainly does not stand as the sole election model, Nate Silver seems to take a much more elaborate and well-rounded approach to the current circumstances than other forecasts.4

Curious about the impact of fluctuations in turnout, I created state-level and national models that run thousands of simulations representing various levels of turnout5 for the 2020 election. Different turnout numbers did not lead to different election outcomes.6 The state-by-state model helps to visualize possibilities with the Electoral College, and the national model simulates possibilities for the nationwide popular vote. The two binomial logistic regressions incorporate slightly different variables depending on the available data, and this variation in model construction provides different possibilities for election day results. While neither model is perfect, these simulations laid the groundwork for improvements in weeks to come. 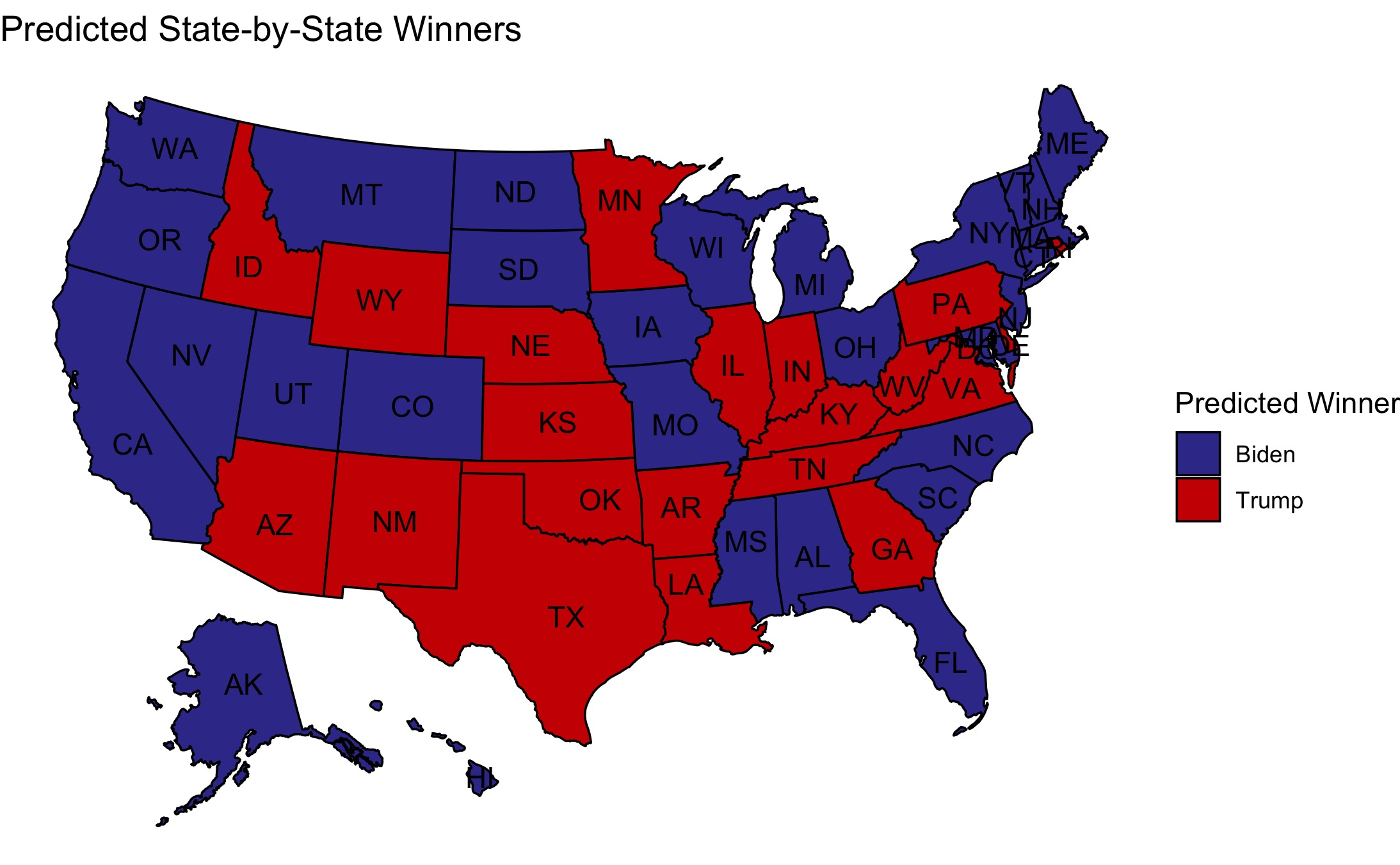 Given what we know about states’ tendencies to swing one way or another, this map does not seem too outrageous. However, this model could use some improvement. Several core Republican states–such as Alaska, Mississippi, and Alabama–appear to vote blue under this model. In future weeks, I hope to construct 3 separate models instead of 50: one for reliably blue states, one for reliably red states, and one for swing states. This method will draw from a larger pool of data and construct models for groups of similar states. Following this procedure will minimize the risk of overfitting models for individual states, which caused some unlikely predictions in this 50-model forecast.

I followed a similar procedure as above to construct a binomial logit model for the nationwide popular vote. This model predicts vote counts for each party using polling numbers, incumbency status, the interaction between polling and incumbency, and Q1 GDP growth. In this model, I ran 100,000 simulations with various levels of turnout. 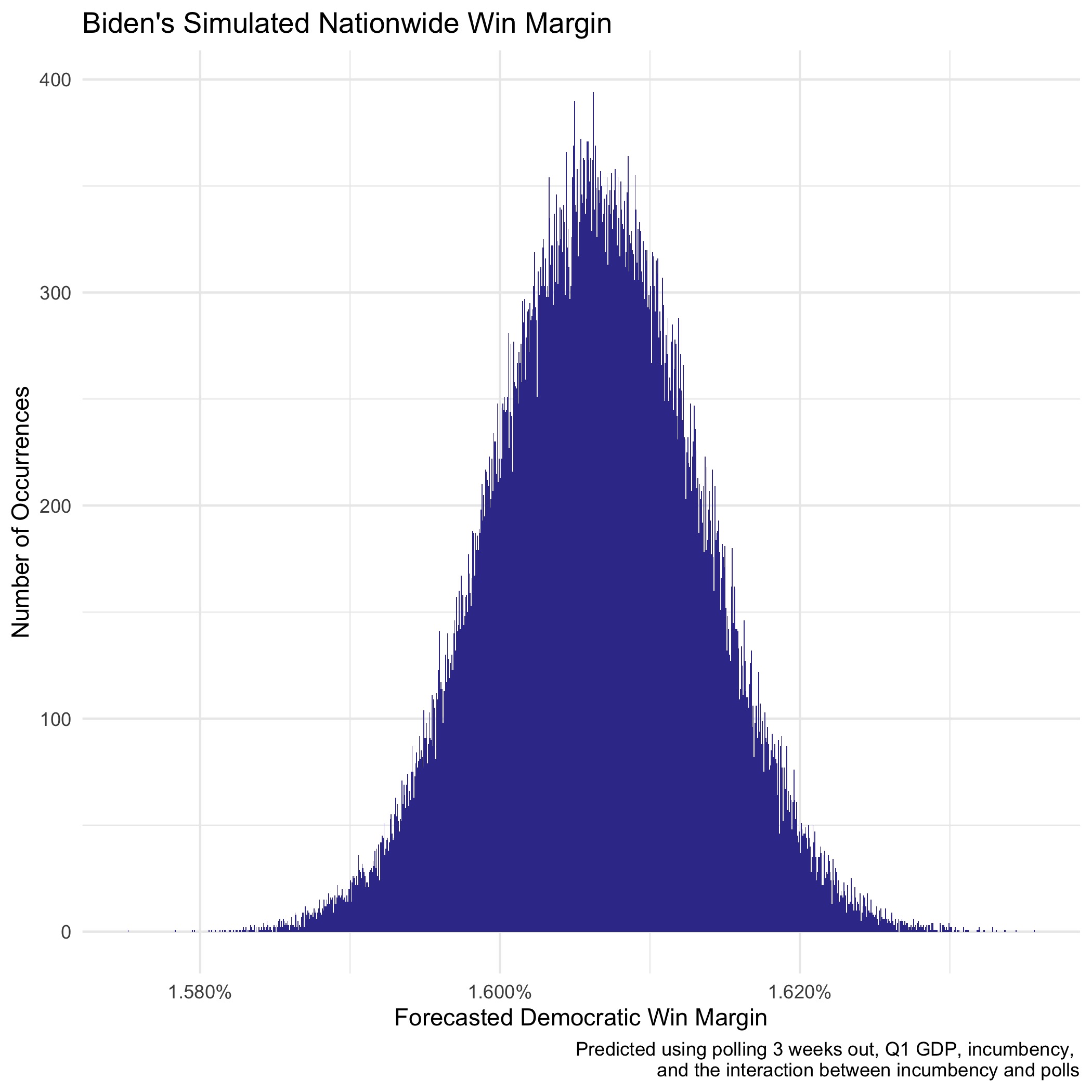 In forecasting the 2020 election, experts must grapple with uncertainty regarding COVID-19’s impact on turnout. COVID-19’s impact extends beyond turnout, however. The theory of retrospective voting raises the question of how voters may punish or reward the incumbent candidate for the handling of COVID-19, wildfires, hurricanes, racial injustice protests, and more. Next week’s post will examine the impact of shocks and unexpected events on presidential elections.