Since the Electoral College ultimately decides the outcome of US presidential elections, “swing” or “battleground” states play a pivotal role in electing presidents. The notion of electoral swing takes on several definitions that vary by context. For example, a state with electoral volatility experiences swings in voting patterns between elections. Conversely, a state that consistently posts close races could swing either way on Election Day.

By this definition, a state with a large swing may not have a close election. To address close elections, this analysis defines battleground states as those with two-party vote shares between 45% and 55% for one or both of the 2012 and 2016 presidential elections.

States have voted relatively predictably in elections over the course of the past two decades. However, Donald Trump “blew up” the Electoral Map in his 2016 victory when many reliably blue states flipped to red. The below graphic displays shifts in the two-party vote across the country between the 2012 and 2016 presidential elections: 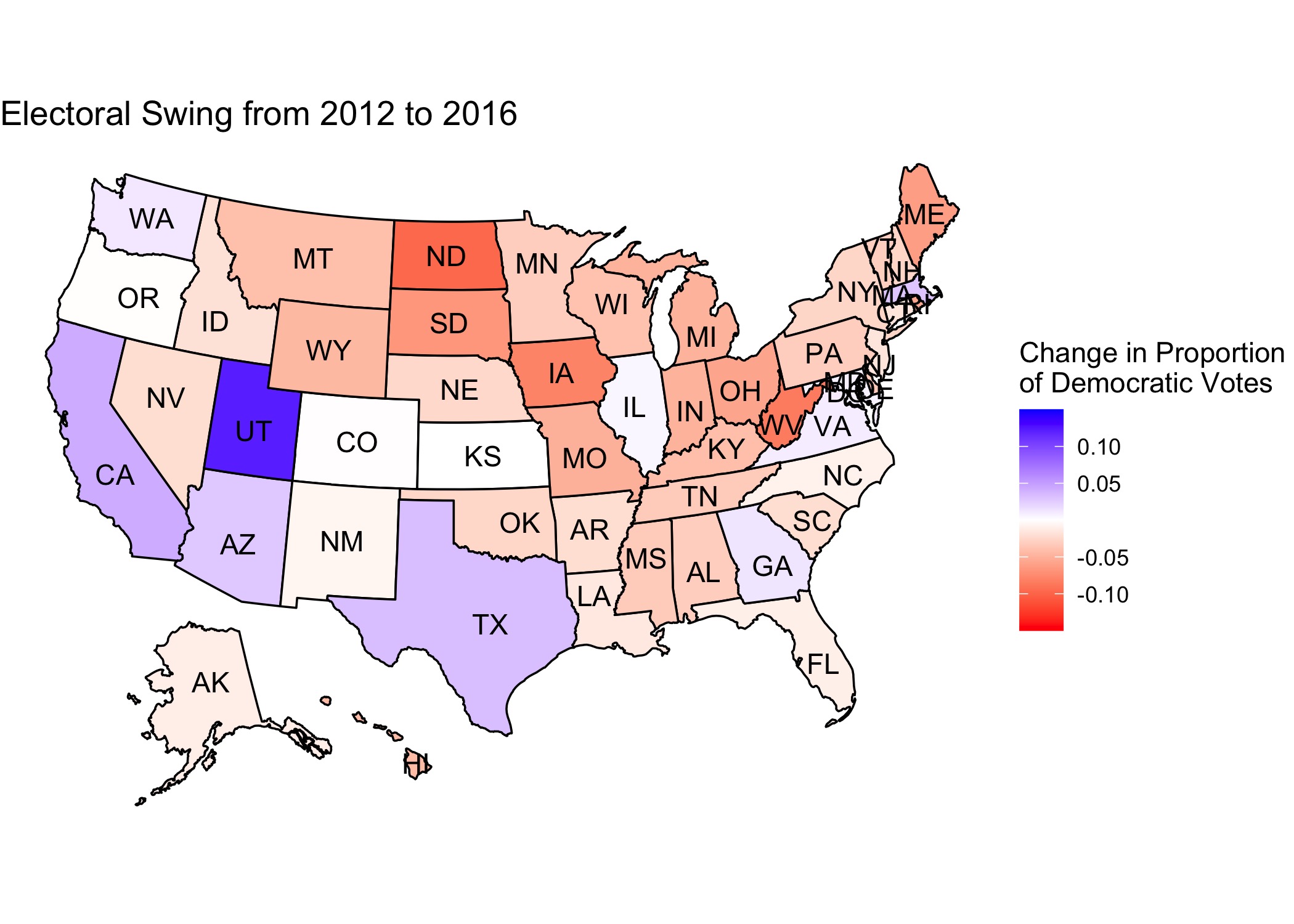 Electoral Swing in Battleground States from 2012 to 2016

To identify potentially meaningful trends for 2020, it is helpful to focus on electoral swing in battleground states from 2012 to 2016. The plot below displays battleground states and their respective changes in two-party vote share (see this table for a closer look at the numbers): 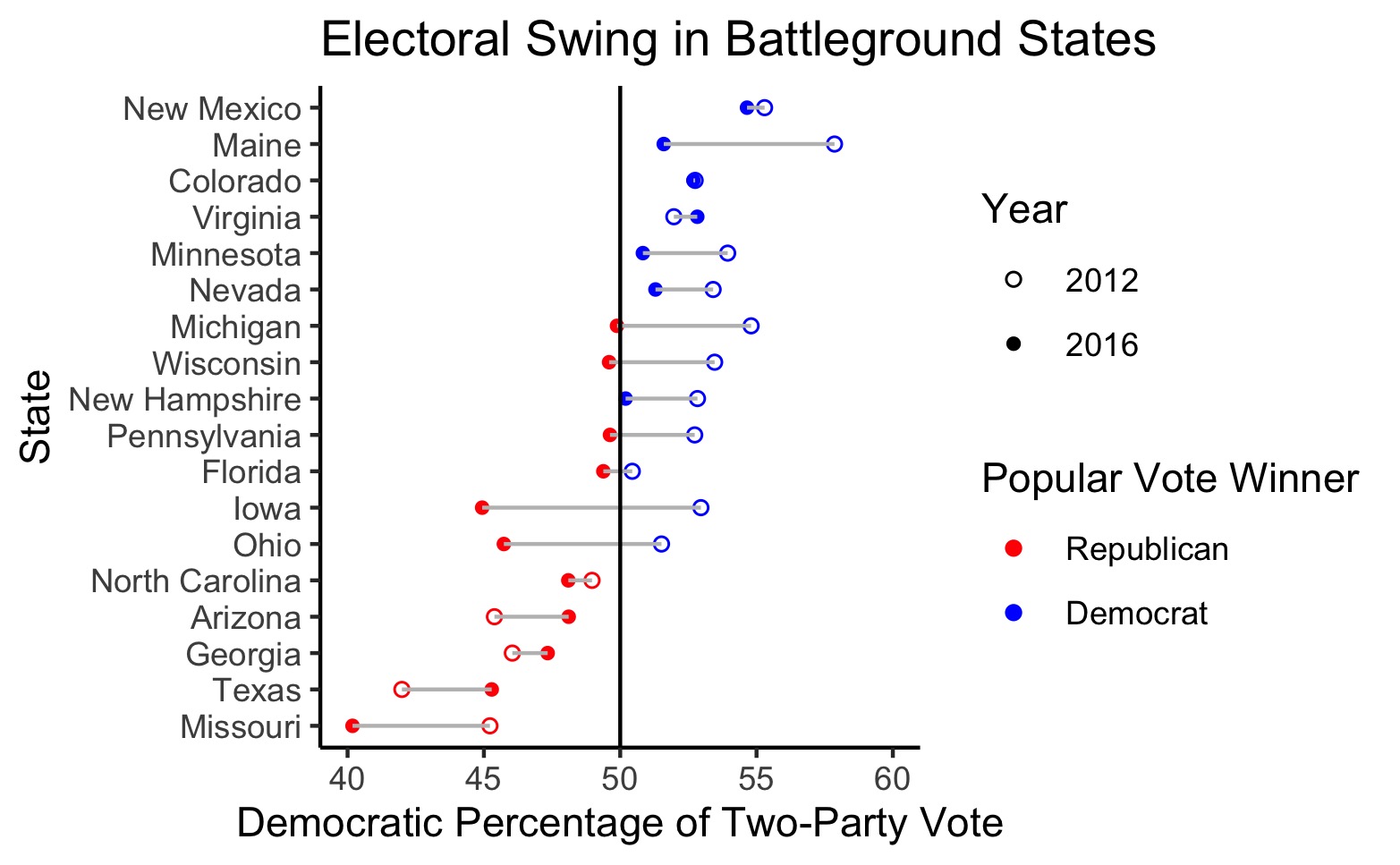 Of the pre-defined battleground states, three out of four of the blue-trending battleground states voted Republican in both elections, and none of the blue-trending states flipped parties. Texas exhibited the largest Democratic shift, followed by Arizona and Georgia. If the trends in these states continue over time, they could reasonably flip to blue in the next few election cycles. 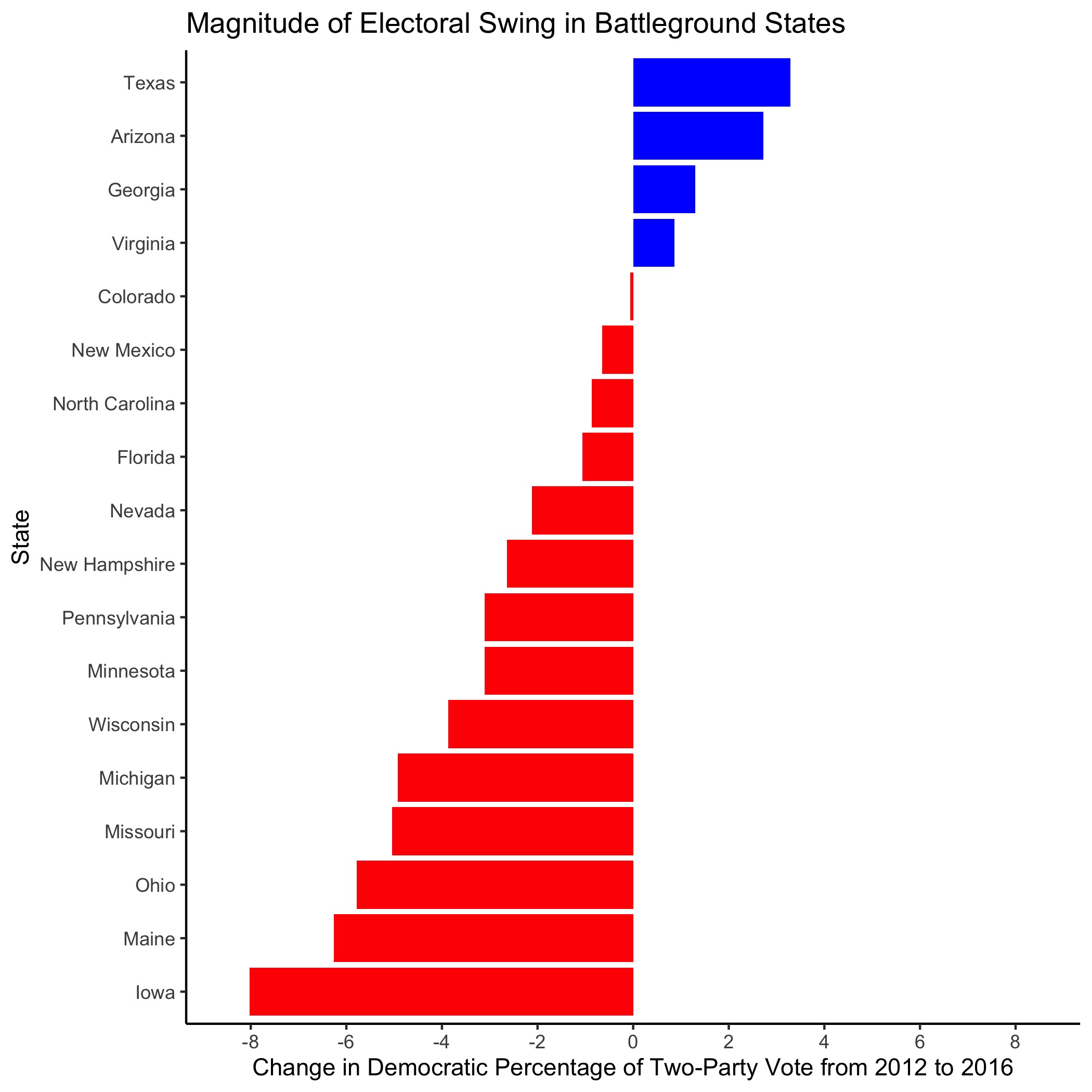 With the 2020 election on the horizon, electoral swing is becoming increasingly important. Research on past elections by Gallup reveals that incumbents can still win re-election in spite of public dissatisfaction. For the Democratic Party to stand a chance in the 2020 election, Joe Biden must win the popular vote in a subset of red states from 2016. This interactive tool by the New York Times supports the notion that voters in a dozen competitive states will decide the 2020 presidential race.

Of course, the additional context of COVID-19, racial protests, and economic turmoil add additional noise not captured in the trends observed between 2012 and 2016. However, patterns of the past lay the groundwork for the future, and studying recent partisan trends in states will prove worthwhile when anticipating the results in November.