Last week’s blog post revealed that a economics-only model yields unrealistic results for the 2020 election due to the economic tumult of the past 9 months. However, incorporating additional variables, such as approval numbers or polls, helps capture a more well-rounded snapshot of electoral possibilities.

Polls in the first half of election years often serve as weak predictors for November outcomes, but polls ultimately converge to the election outcome as Election Day approaches. Political scientists theorize that this convergence of numbers occurs due to voters reaching their enlightened opinions1, and a quick look at the polling numbers since May 2020, when Joe Biden became the presumptive Democratic nominee, confirm this notion as the numbers begin to stabilize in September:

Building off of Economy Model 3

To begin, I replaced Q3 job approval numbers with presidential polling averages. This adjustment brought the adjusted r-squared to 0.966, meaning that the model fit the data strikingly well. However, this also put the model at risk for overfitting the historical data and performing poorly out-of-sample. To amend this, I removed the interaction term between incumbency and Q1 GDP growth (but kept it for incumbency and average support), which lowered the adjusted r-squared to 0.910 but improved the out-of-sample fit. This new model successfully classified two-party popular vote victories in 84.6% of the post-WWII elections when performing leave-one-out cross validation.

Last week’s model predicted the two-party vote share for the incumbent party, which poses an issue if I wish to apply it to both candidates. While I could still estimate Trump’s predicted vote share with this model, it would not accurately estimate Biden’s vote share since it was only fit with data from the incumbent party. To maintain a consistent approach for both candidates, I elected to fit a model with data from both parties.

To construct a model for both candidates, I removed the incumbent party filter from last week’s Model 3, incorporated historical polling numbers in the place of Q3 job approval, and removed the interaction term between incumbency and Q1 GDP growth. Also, since the polls account for undecided and third-party voters, I constructed this model to predict the overall popular vote share of the two major candidates instead of the two-party vote share:

This new model has an adjusted r-squared of 0.688 and correctly classified 84.6% of the past elections in leave-one-out cross validation. When put to the test with 2020 numbers for the respective candidates, the model predicted that Biden would win approximately 51.2% of the popular vote and Trump would earn 47.6% of the popular vote.

Predictions from 2020 Polls Based on 2016 Performance

As mentioned in the introduction, polls generally serve as a helpful indicator for the electorate’s positions on candidates, but some polls make better predictions than others. FiveThirtyEight has compiled data on pollster ratings that account for bias and errors. Below, Figure 3 displays the sums of the absolute value of errors2 for Clinton and Trump’s vote shares from various September 2016 polls: 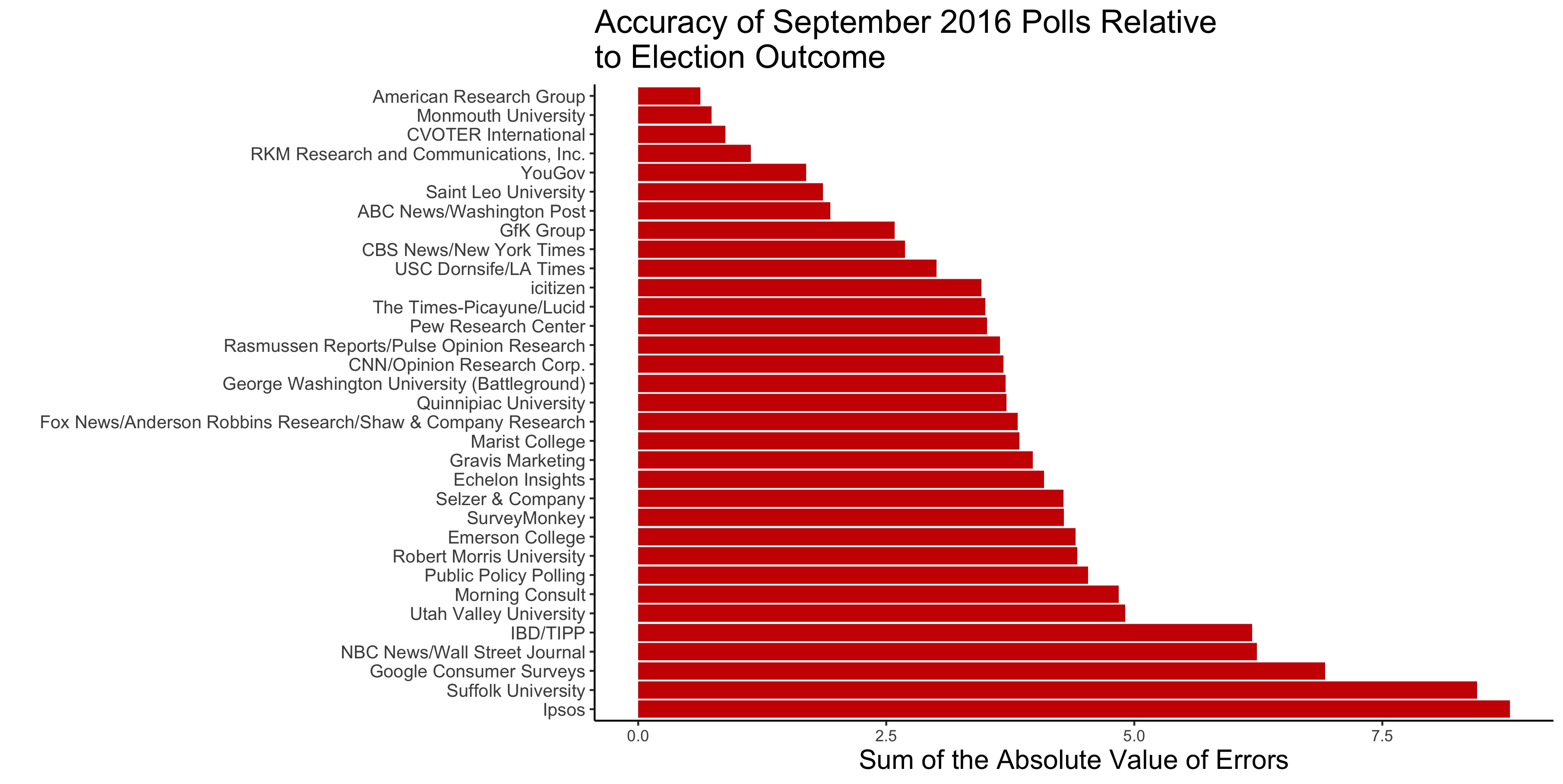 To supplement my regression model, I compiled another set of predictions by weighing3 September 2020 pollster numbers relative to their accuracy in September 2016. Applying greater weights to more accurate polls from September 2016 yields predicted vote shares of approximately 50.7% for Joe Biden and 42.7% for Donald Trump4.

Drawing inspiration from this week’s laboratory section, I sought to combine the two predictions into a single method. While I personally align with Nate Silver’s stance that polls matter more than fundamentals as the election nears, I elected to only calculate a simple average.5

A Note on Forecasters’ Different Approaches

The models presented on this blog draw inspiration from but pale in comparison to forecasts from FiveThirtyEight and The Economist.

Both forecasts incorporate a mixture of polling and fundamentals in their models, with The Economist relying more heavily on fundamentals and FiveThirtyEight focusing more attention to polls, especially as the election nears. Nate Silver of FiveThirtyEight justifies this approach in stating that the small sample size of overall elections makes economic models challenging. Not only that, but he also cites the noisy relationship between economic conditions and the incumbent’s party performance as a cause for caution. On the contrary, The Economist takes a more fundamentals-forward approach and aims to combat overfitting and other issues through elastic net regularization and leave-one-out cross-validation.

In addition to balancing between fundamentals and polls, both models also adjust for state partisan lean, run thousands of simulations to anticipate possible outcomes, adjust polling and economic numbers, and attempt to account for uncertainty. FiveThirtyEight more clearly outlines specific approaches tailored toward the unique circumstances of COVID-19. However, this is The Economist’s first ever statistical forecast of an American election, so they may have decided to not include a section since they are not deviating from any precedent they set in the past.

FiveThirtyEight has more historical experience in forecasting elections, and I feel that it has a better approach for forecasting the 2020 election. On top of the thoroughly explained COVID-19 adjustments to their model, the lower dependence on economic indicators and increasing focus on the polls seems fitting for the unusual economic circumstances of 2020.