This forecast predicts that Joe Biden will win a popular vote victory of 52.7% with a narrow Electoral College majority of 273 votes compared to Donald Trump’s 265 votes. However, the model projects a high level of uncertainty in several battleground states. As a result, the Electoral College could easily swing to a Trump victory or further in Biden’s favor.

In this forecast, a binomial logistic model1 predicts the state-by-state probabilities that an individual will vote for either party, using a combination of polling, economic, demographic, and incumbency data:2

To gauge public opinion, the model includes average state-level polls3 in the final 4 weeks before the election. Election-year Q1 GDP growth captures the state of the economy, and the incumbency term accounts for the incumbent advantage. Since past elections serve as excellent predictors for future elections, the forecast includes a term for the difference between Democratic and Republican state-level two-party vote share in the previous election. Lastly, demographic variables4–the change in the state’s Black population, age 20-30 population, and age 65+ population–capture the impact of shifting demographics on election outcomes. The Appendix includes a graph of the model’s coefficients, further discussion about each variable, and a more detailed description of how I arrived at my prediction from this model.

To test the validity of this model, I performed leave-one-out cross-validation for each state in every election from 1992-2016.

For example, I constructed a model excluding Texas in 1996 and then used that model to predict the winner of the Texas popular vote in 1996. I repeated this process for all 50 states across every presidential election from 1992-2016. Then, I compared each state’s predicted winners to the actual winners.

In elections from 1992-2016, this model correctly classified the statewide popular vote winner 92.2%5 of the time, with the following year-by-year breakdown:

Not surprisingly, the model performed most poorly in swing states. Across all elections from 1992-2016, the model correctly classified the popular vote winner less than 75% of the time in these 6 states:

In the leave-one-out validation for 2016, the model misclassified 6 states: FL, OH, NC, MI, PA, and WI. FiveThirtyEight’s 2016 forecast correctly predicted OH but misclassified the remaining five of those six states. Inaccurate polling numbers likely played a role in the misses for 2016. For the 2020 prediction, I aim to combat this by applying a weighting scheme that favors high-quality pollsters over less reliable sources.3

This model predicts a narrow Biden victory in the Electoral College, with a much larger margin in the popular vote: 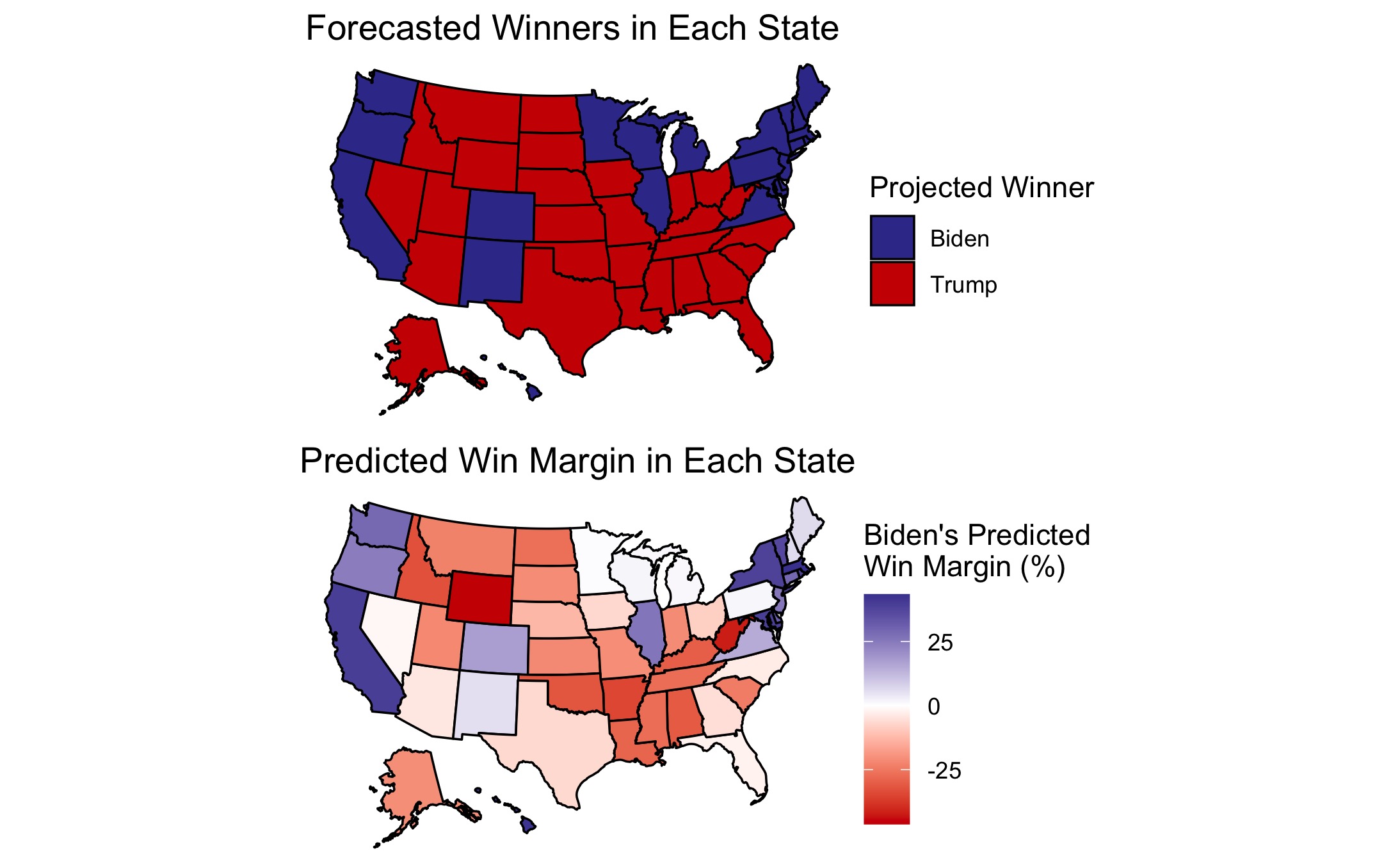 This table contains all state-level predictions of the two-party popular vote.

Any model, including this one, has a near-zero probability of predicting the exact outcome of an election. However, forecasts provide insights into the range of possible election outcomes and the surrounding uncertainty.

As visible in the map of Joe Biden’s predicted win margin, this forecast anticipates close elections in many states, making a Biden landslide possible in the Electoral College if several of Trump’s close states flip to blue. On the contrary, Trump could win the Electoral College if some of the slightly blue states flip to red. How can we quantify the uncertainty with this forecast? 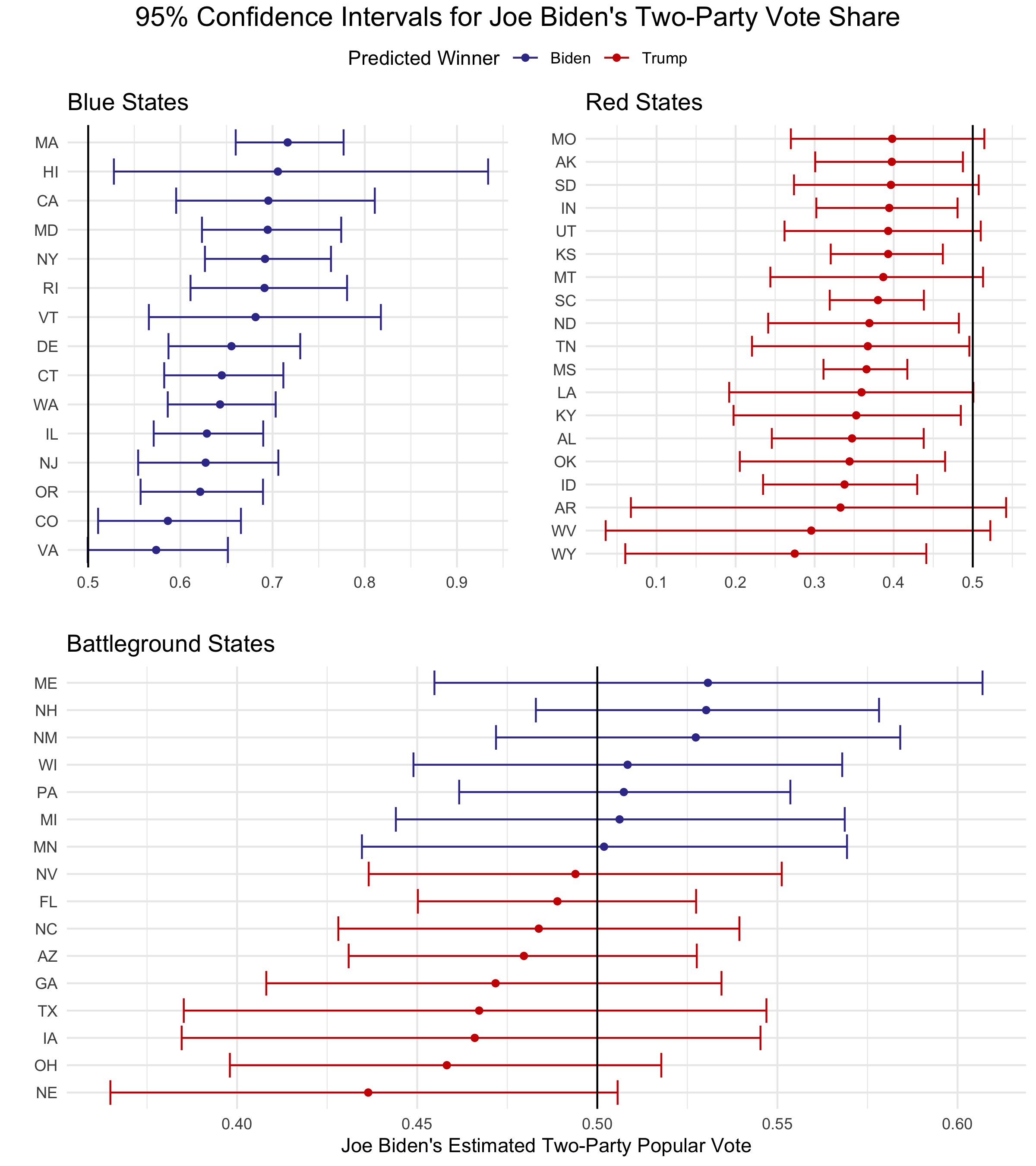 However, Donald Trump has a much smaller chance of winning the national popular vote: 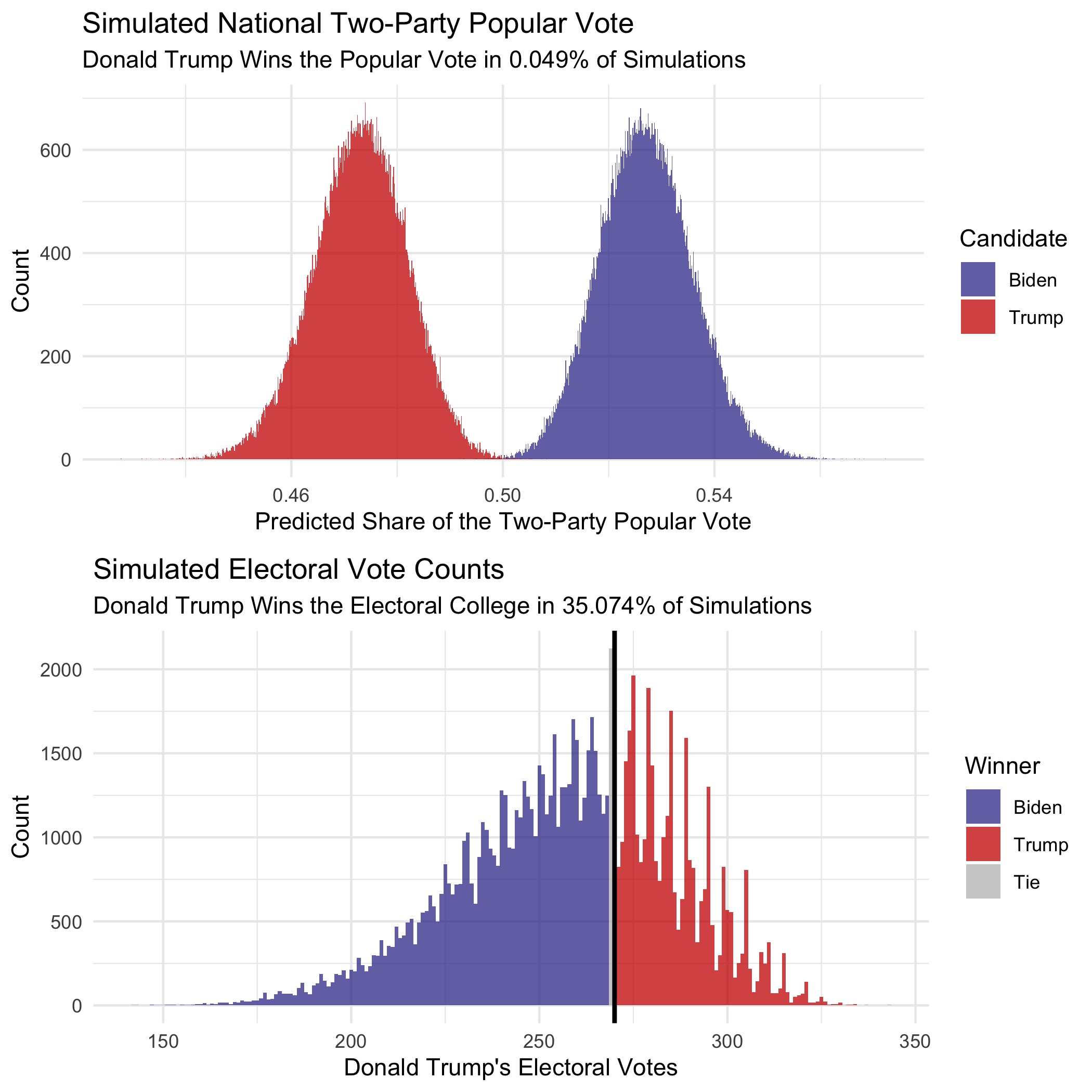 Luckily for Trump, the national popular vote does not matter if he can reach 270 Electoral College votes via statewide victories. While the forecast has a narrow Joe Biden victory as the point prediction, either candidate could reasonably win most of the battleground states. The below table lists the candidates’ probabilities of winning each battleground state, ordered by the projected level of uncertainty: 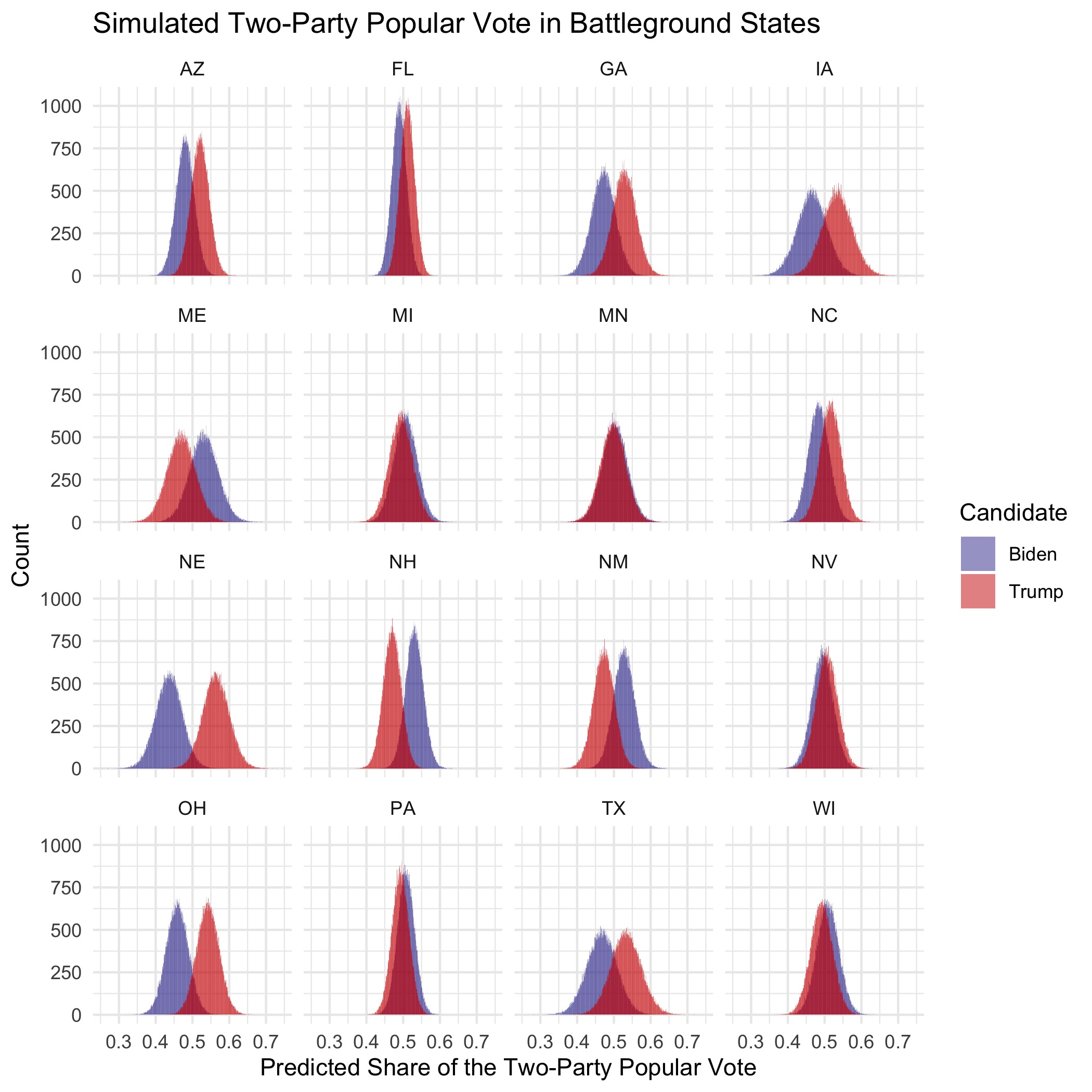 According to this model, the closest battleground races are fairly evenly split between the two candidates. However, these states could all easily swing in Donald Trump’s favor, giving him the Electoral College victory while still losing the popular vote. If one of Minnesota, Michigan, or Florida flip and the other states remain the same, Donald Trump will win the Electoral College. On the other hand, Nevada, Florida, North Carolina, and Iowa could easily all vote for Biden, giving him a much larger Electoral College victory than estimated by the forecast’s point prediction. For a more detailed look at each candidate’s state-level win probabilities, this table lists all states and corresponding levels of uncertainty.

While this forecast performed quite well in the leave-one-out cross-validation and makes reasonable state-by-state predictions, it also has several limitations:

This model predicts a narrow Democratic victory with a 273 to 265 Electoral College majority and approximately 52.7% of the two-party popular vote. However, the close state-level vote margins, especially in battleground states, increase the level of uncertainty.

Due to the close margins in several battleground states, the Electoral College could easily swing in the direction of a Trump victory or a Biden landslide. For example, if Joe Biden wins Michigan, Nevada, Texas, or any other state with a narrow victory projected for Trump, Biden could win far more than his projected 273 votes. However, if Trump wins New Hampshire, Nebraska, Pennsylvania, Wisconsin, or any other states projecting an extremely narrow Biden victory, he could easily tip the electoral scale in his favor. This forecast gives Joe Biden a 62.8% chance of a Joe Biden Electoral College victory, a 35.1% chance of a Donald Trump Electoral College victory, and a 2.1% chance of an electoral tie.

2020 has been quite the year, and the uncertainty surrounding the 2020 election will likely add to the chaos in the coming days.

This section further explains the details of this model and expands upon ideas that did not fit well into the main content of this post.

To create individualized models while avoiding overfitting, I grouped states into three separate categories: blue states, red states, and battleground states, as classified by the New York Times. Within each group of states, I constructed two models–one that predicts the probability of voting Democrat and one that predicts the probability of voting Republican–yielding a total of 6 models.

To produce a single value for the popular vote and Electoral College prediction, I had to aggregate the 5,000,000 simulations in some way. For the nationwide two-party popular vote, I took the average number of voters for each party within each state, then estimated the nationwide vote count by summing each party’s state-level averages. Using these two sums, I calculated the estimated two-party vote share for each party.

I assigned each state’s electoral votes to the candidate who won the popular vote in the majority of the 100,000 election simulations. Then, I summed the electors for each state and added 3 to Joe Biden’s vote tally to account for Washington D.C.

To account for the increased turnout in early voting, I included polling numbers from the last four weeks leading up to the election. This method yielded the best out-of-sample fit when compared to polling intervals ranging from the last five weeks to only the last week:

Incumbent candidates benefit from structural advantages, including but not limited to increased media coverage, widespread name recognition, an early start to campaigning, and more. This model incorporates incumbency status to help capture the effect of incumbency status on vote share.

Data suggests that voters focus on the election-year economy at the polls as opposed to economic performance over the entire term of the incumbent.9 Assuming that a similar trend will hold for 2020, Donald Trump will likely face some punishment at the polls for the economy’s historic lows at the beginning of the COVID-19 pandemic. However, focusing solely on the Q2 economic numbers completely disregards the economic prosperity before the pandemic. On the contrary, using the extremely high Q3 numbers extrapolates in the other direction and minimizes the damage done by COVID-19. To balance between the highs and the lows, this model incorporates 2020 Q1 GDP growth. This metric is slightly negative due to the onset of the pandemic in the US in the final weeks of the quarter, but it is nowhere near as low as the Q2 metric. This metric more accurately reflects how I anticipate voters to assess the economy at the polls: not great, but not hopeless beyond return.

As mentioned in the main content of the post, past elections serve as one of the best predictors for current elections, especially at the state level. Incorporating each state’s previous Democratic vote margin considers recent voting behavior.

Demographics serve as strong predictors for voting behaviors, so incorporating the change in each state’s Black population accounts for changing demographics in the voting population. Black voters in particular lean Democratic, so this variable captures potential shifts in the partisan leaning within each state. Also, age serves as a fair predictor of voting behavior: younger voters tend to vote Democratic and older voters exhibit a greater tendency to vote Republican. While conducting leave-one-out validation for models, this combination of demographic factors yielded the highest rate of classification success. 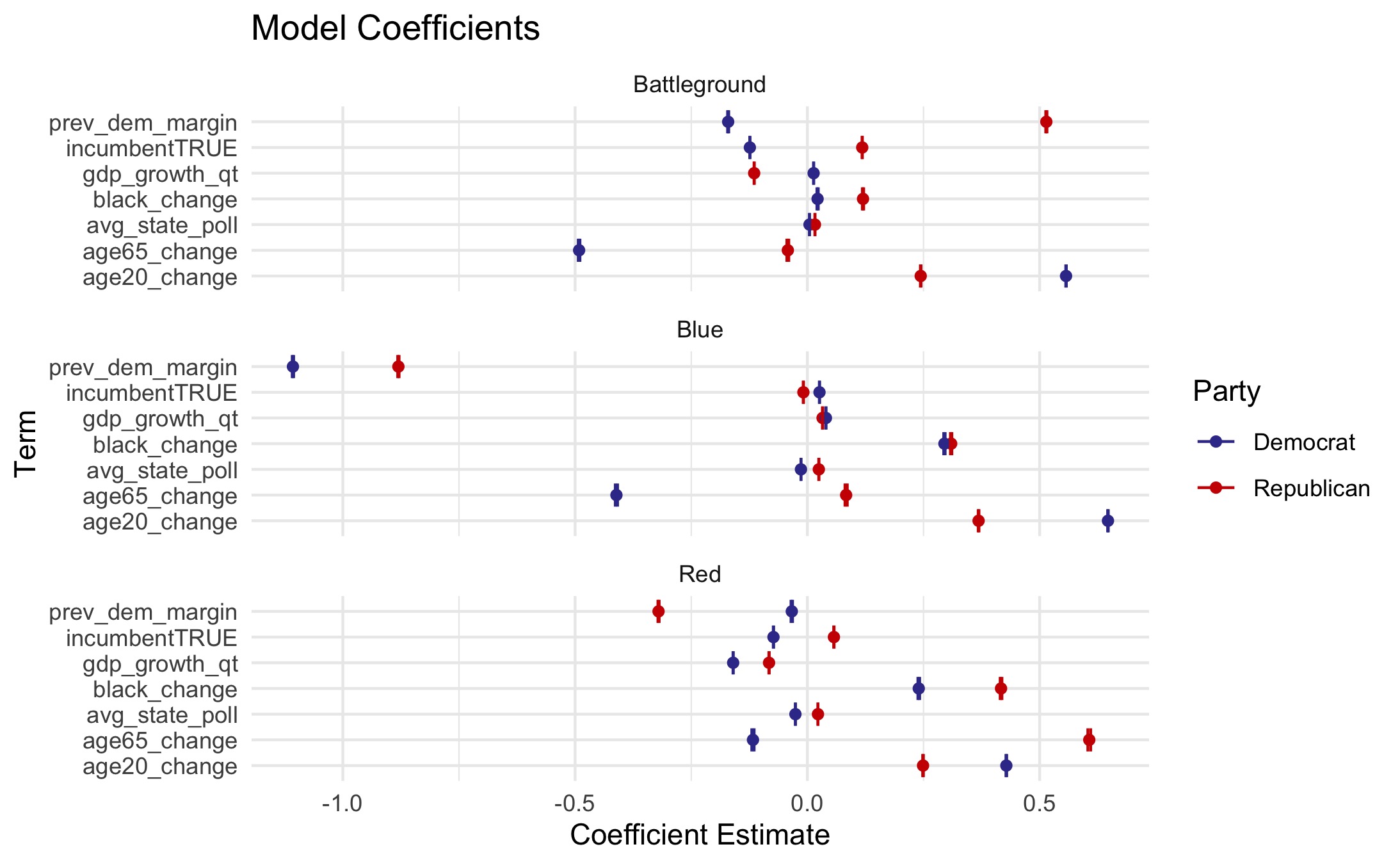 Well-known forecasting models give Joe Biden an extremely high probability of victory, with The Economist giving Biden a 95% chance of winning the Electoral College and FiveThirtyEight giving Biden an 89% chance of winning an electoral victory. Roughly 1 in 10 people confuse probabilistic forecasts with vote share estimates, so, while these forecasters do not have malicious intentions, their work often confuses voters. Probabilistic forecasts likely influenced turnout and played a role in the 2016 outcome in Donald Trump’s favor.10

The section on uncertainty of this post does mention win probabilities, but I prefaced the presentation of the numbers with a note that they are not estimated vote share. Humans naturally struggle with interpreting probabilities, so that forewarning may not have been enough. However, I felt that it was important to include the probabilities since they communicate that this model gives Donald Trump a decent chance to win the Electoral College.

Problems with the Electoral College

Nearly 3 million more Americans voted for Hillary Clinton in 2016 than voted for Donald Trump, yet he still won the election due to the United State’s Electoral College system. The win probabilities for both candidates in this forecast highlight the possibility for an electoral imbalance once again: Donald Trump has less than a 1% chance of winning the popular vote but nearly a 40% chance of winning the Electoral College. Many people argue that the Electoral College is an outdated system with no modern merits of existence. Unfortunately, the party reaping the advantages of the Electoral College system has resisted moves to strip them of their advantage throughout history, and that pattern will likely continue for the foreseeable future.

“Coming Home” and Polls in the Final Days

As Election Day approaches, voters appear to “come home” to their partisan loyalties in many states as close races become more spread out. Two weeks before the election, this model predicted that Trump would only win Texas by less than 0.01% of the popular vote, for example. However, it now gives Donald Trump an 80% chance of winning the state and forecasts a fairly decisive Trump victory in Texas.

In the FiveThirtyEight Podcast (released on 10/30/2020), Nate Silver described a tightening of polls in battleground states as the election approaches. Since most polls show a Biden lead, this should generally mean positive momentum for Trump. Does this indicate that some Trump supporters, previously apprehensive about supporting the president, are returning to their allegiances after all? Unfortunately, analyzing polls may only work to a certain extent. Can we trust polls to provide reliable information about voters’ positions, especially after they missed the mark by so much in the 2016 election? Luckily, only a few days of speculation remain before Election Day.